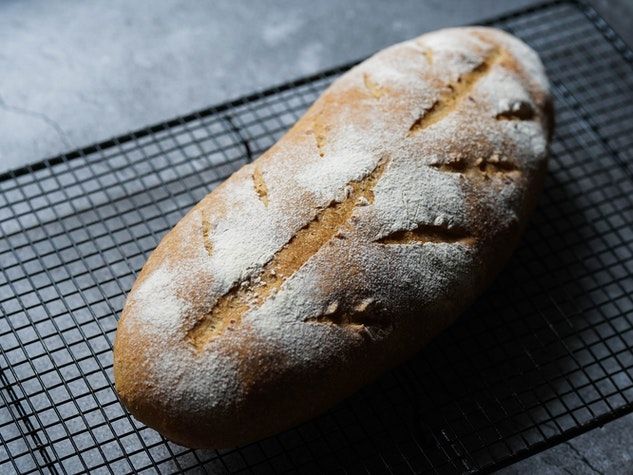 How to Choose a Low FODMAP Bread?

Eating foods that are low in FODMAPs* can be helpful for many individuals by helping them better control their symptoms related to Irritable Bowel Syndrome (IBS). However, finding low FODMAP products, like a good bread, can be tricky. If you are currently following a low FODMAP diet, I invite you to read this article to help you choose a bread that is right for you!

Low in FODMAPs versus gluten free

The main FODMAP that is found in bread is fructan. Fructans are found in the same grains that contain gluten (wheat, barley, rye, kamut, and spelt), but gluten and fructans are two distinct compounds: gluten is a protein, while fructan is a sugar. For example, some breads that contain gluten may be low in FODMAPs (especially sourdough breads), and some gluten-free breads contain ingredients high in FODMAPs such as honey, inulin, molasses, apple extracts and raisins.

Which breads are low in FODMAPs?

Some gluten-free breads are low in FODMAPs, but be careful, this isn’t always the case! It is very important to verify the ingredient list! Honey, which is high in fructose, is sometimes used in place of sugar. Inulin, which is high in fructans, is a type of fiber that is sometimes added to bread to increase its fiber content. Dried fruits are high in FODMAPs, so breads that contain them, such as raisin bread, are not good choices. Other ingredients to avoid are: chicory root, molasses, fructose, fructooligosaccharides (FOS), agave, glucose-fructose, apple, and sugar derived from fruit. Amaranth flour, coconut flour, bean flour, chestnut flour and cassava flour are high in FODMAPs even though they are gluten-free. Psyllium has not been tested by Monash University, but some products certified as low FODMAP contain it, so we can assume that it is low in FODMAPs when consumed in small amounts. The following ingredients are low in FODMAPs and therefore allowed: cane sugar, dextrose, glucose, maple syrup and rice syrup. There are a variety of gluten-free flours that are also low in FODMAPs and therefore permitted with the low FODMAP diet: buckwheat, millet, quinoa, oats, rice, tapioca, corn, sorghum, almond and teff. However, be careful, as some of these can only be consumed in limited quantities! Almond flour is low in FODMAPs up to ¼ cup (24g). Buckwheat flour is low in FODMAPs for 2/3 cup (100g), but buckwheat grains are allowed for only 1/8 cup (27g).

Sourdough bread is lower in FODMAPs than regular bread because fermentation generally reduces the FODMAP content of foods. During the fermentation process, the microorganisms feed on FODMAPs, which lowers their content. Note that there is an exception in the case of sauerkraut (fermented cabbage), which is much higher in FODMAPs than raw cabbage. While raw cabbage does not contain mannitol, its fermentation produces mannitol as a by-product, making sauerkraut high in FODMAPs.

Sourdough bread made from wheat has been tested by Monash and is low in FODMAPs for 2 slices (109g). However, people with celiac disease should avoid it because it contains gluten. Sourdough bread, even if it is white, is still a healthy choice since it has been fermented. During fermentation, bacteria transform food and create a multitude of bioactive compounds with distinct health benefits.

Standard white bread (made of wheat) has been tested by Monash and is low in FODMAPs for one slice (24g). Even though it contains wheat, it has been processed and does not contain enough fructans to cause symptoms for most people with IBS. If you choose a commercial bread that has a nutrition label, then rely on the serving size in grams, as the size of a slice varies greatly from a bread to another. If you choose fresh baked bread from a bakery that does not have a nutrition label, eat a medium slice or weigh your slice of bread at least once to get a better idea of ​​the serving size. Make sure you don’t eat more than one slice of white wheat bread per meal.

Fiber intake is often reduced when eating a low FODMAP diet, which can adversely affect the good bacteria in the gut (since they feed on fiber) and symptoms of IBS. Therefore, it is important to choose whole grain products most of the time. Try to choose bread that is high in fiber, that is, one that contains at least 2.5g of fiber per two-slice serving. Here are some good choices below.

2 comments to “How to Choose a Low FODMAP Bread?”

Thank you for the update on bread ingredients and the FODMAP diet.
L’Angélique produces a gluten free flour called La Merveilleuse. I use it to make my gluten free breads, cookies etc.
Is that flour acceptable on a FODMAP diet ?