These other delicacies are also popular and typical around the country. Their ingredients vary from region to region, which makes them all the more interesting and delicious! 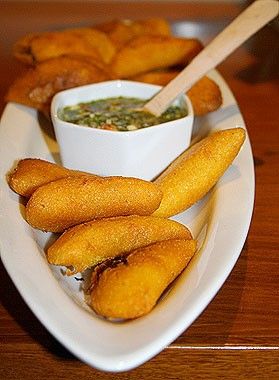 In Colombia, empanadas are very popular foods that can easily be found on street corners. These unique empanadas have an outer crunchy crust made out of cornmeal, which distinguishes them from other types of empanadas from different countries. The fillings vary according to the region. An empenada will usually contain grinded meat (beef or pork), boiled potatoes and hogao sauce (a mix of tomatoes, onions, garlic and cilantro). These scrumptious empanadas are usually served with spicy ají sauce.

The Colombian tamal is a blend of food wrapped up in large banana leaves. There are many variations of the ingredients, depending on the region. The tamal that I tried was was the Tamal Santafereño, typical of Bogota. This tamal typically contains porkchop, pieces of chicken, longaniza, potatoes, cheese sauce, carrots and chickpeas. This was definitely one of my favorite meals!

The arepa is a recognized symbol and icon in Colombian gastronomy. It is probably the dish that varies the most around the country. It is a flat, round, unleavened patty made of cornmeal or flour and can be made in different forms. It can be grilled, baked, boiled or fried. It can be topped or filled, like a sandwich, with a variety of ingredients. Arepas can be used as an afternoon snack, with common toppings such as butter or cheese as well as Colombian chorizo or hogao. One of the most popular types of arepas is the egg arepa, which originates from the Caribbean coast.