Farinata is a type of pancake with Italian origins made from chickpea flour. Its origins date back to the Middle Ages and it is still widely consumed today in northwestern Italy and a little bit all over the world. I invite you to discover this classic food from the Ligurian coast.

What is a farinata?

A farinata is made from a few simple ingredients: chickpea flour, water, salt and olive oil. Farinata means “made of flour” in standard Italian. A batter is formed from the ingredients and with it one creates 4mm thick pancakes. The paste is then cooked in a large round tin-plated copper baking dish in a wood oven (see the video below). The farinata takes on a golden color when baking and burns slightly in some places. It is traditionally cut into irregular triangular slices and consumed without garnishes. The slices can be seasoned with fresh rosemary, pepper and sea salt. Farinata must be eaten right away as it’s not very tasty cold and doesn’t warm up very well. It is sometimes eaten as a “street food”, where it is served wrapped in paper and one eats it directly in the street.

During SOSCuisine’s latest trip to Italy, we went to taste the farinata at Vino e farinata in Savona (near Genoa), an establishment that has been in the same place for centuries. Here is an overview of how they prepare it:

Like many traditional recipes, farinata has variants in some regions, but it is native to Genoa, the main town in Liguria, a region in northwestern Italy. In Nice (France) for example, the same recipe is called “Socca”. The true story of its creation remains unknown. Legend has it that it was discovered by chance during a storm at sea that caused damage in the hold where chickpeas were stored. The chickpea puree would have then dried in the sun and created a pancake. This incident is believed to have occurred in 1284 on a Pisans boat after a battle where the Genoese had defeated them. The Genoese are thought to have then taken over and perfected the recipe. Even calling it the “the gold of Pisa” as a snub to their adversary. Another legend tells that it was invented by a group of Roman soldiers who roasted chickpea flour on a shield.

Chickpea flour has 40% more protein and 4 times more fiber than all-purpose flour. If you can’t find it at your local supermarket, you can find it at a natural food store.

Here’s how to prepare a homemade farinata: 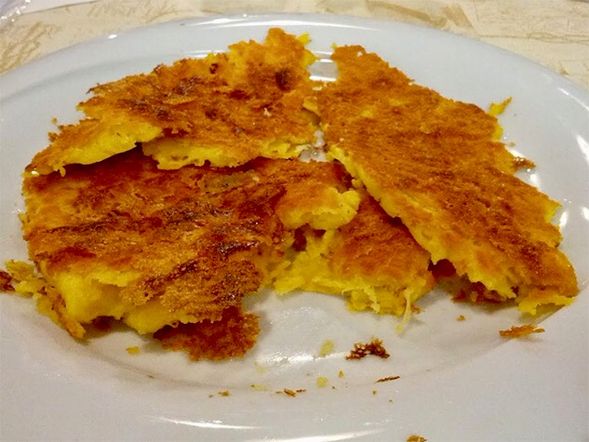