Get ahold of some guinea hen

Originally published in the Journal de Montréal on March 1, 2008.

It was the Portuguese who brought back the guinea hen back from Africa. It is known as “pintada” in Portuguese, meaning “painted”. As a matter of fact, the bird has white spots that look as if they have been painted onto its dark grey plumage.

No bigger than a small chicken, this bird is raised around the world and is appreciated for its meat, which resembles chicken but is much tastier. Guinea hen can be prepared in the same manner as chicken, and it can even replace it in most recipes, but since its meat is leaner, it may become dry during cooking.

So you should baste it before roasting, like I have suggested in this week’s recipe. Over the last few years, many Quebec farms have even started raising and exporting guinea hen, which is now easily available in our supermarkets.

Try our recipe for Roasted Guinea Hen with Herbs 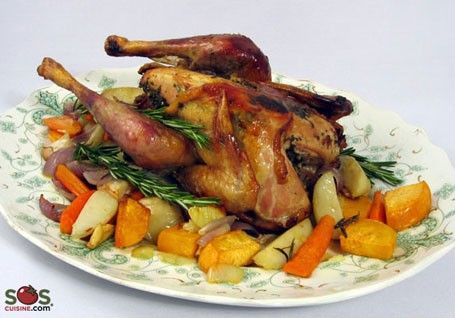