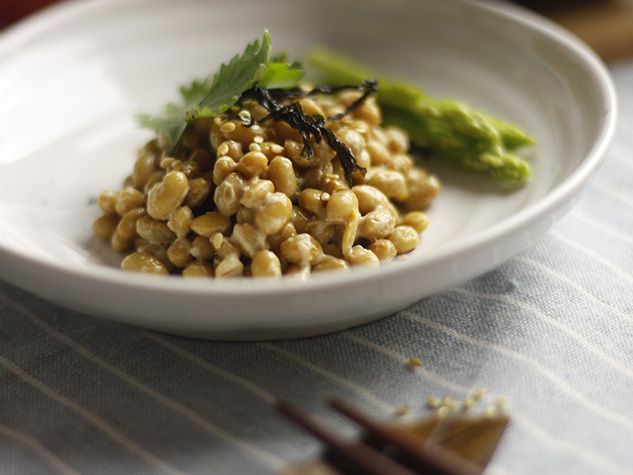 Nattō is a traditional Japanese fermented food based on soybeans that are fermented after seeding the bacterium Bacillus subtilis natto. When the grains are stretched, they become linked together by amazing caramel-colored threads, like that of processed cheese. This slimy appearance as well as its strong fermented-ammonia smell make it unappetising for uninitiated foreigners. In fact, nattō  is one of the worldly “delights” on display at the Disgusting Food museum in Malmö, Sweden. It’s somewhat astonishing that its taste is not too strong, with a flavor that is reminiscent of hazelnut.

According to a 2017 poll, Japanese are also not unanimous in their appreciation of nattō, with only 62% liking it and 13% hating it. Though all consume it for its health benefits (according to the popular diction “a pack of natto a day keeps the death away”). They eat it mostly in the morning on a bowl of rice, accompanied by green onions and a raw egg.

The first mentions of a fermented soya bean product, imported from China and consumed in Buddhist temples, appear in documents dating from around the year one thousand. Until the discovery of the bacterium involved in the process in the early twentieth century, the Japanese prepared their nattō at home, by wrapping boiled soybeans in small packets of rice straw. It has since been produced industrially.

Containing about 18g of protein per 100g of nattō, it is very nutritive and digestible, rich in fibers and with proven beneficial effects on the intestinal microbiota.  Bacillus subtilis natto produces vitamin K2 making nattō an extremely rich natural source of vitamin K2, with possible positive effects to counter osteoporosis.