Long ago, in certain poorer regions of Italy, parmesan was considered to be a rich man’s luxury.

No doubt, it was a smart and ingenious cook who invented the “poor man’s parmesan”, by browning some breadcrumbs in a pan, with a few cloves of crushed garlic and a bit of olive oil.

Ever since then, this “gold dust” has become a very popular garnishing on fish based pasta, in Italy. I’m proposing here, Sicilian pasta with cauliflower. In case you are unable to find bucatini (hollow spaghetti), you can use normal spaghetti in its place. 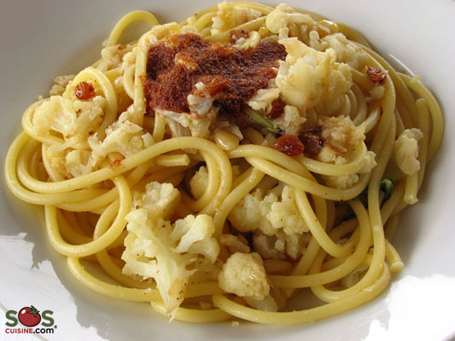 didn’t know about this before

thanks for the tip

can it be done in advance an refrigerated?

Yes, I suppose that it could be prepared in advance and refrigerated. Personally, I have never done it because it does not take longer than 3 minutes to make.