A dietetic technician in the R&D team at SOS Cuisine since 2009, I am also a ‘globe-trotting gastronome’. As part of my latest university internship, I had the opportunity to go and study food in Kenya!

Apart from proving to be an extraordinary and rewarding life experience, this training gave us the possibility of discovering realities that, from a gastronomic as well as from a human point of view, deserve to be known! Anticipating this, Carlo Petrini, the Director of UNISG, where I study in Italy, had the brilliant idea of handing over four cameras to us before our departure, so that we could film this 10-day journey in the African continent. Incidentally, Carlo Petrini also happens to be the founder and president of Slow Food!

Samuel KaranjaMuhunyu, Director at the « Network for Ecofarming in Africa » organisation, accompanied and guided us during this training. Thanks to his in-depth knowledge of the food domain, the environment and the communities, he was able to help us « decode » Kenya and to explain to us the range of certain problems that the country has to face.

So we documented our trip on video by relying upon the richness of its accounts that we completed by interviewing members of each community that we were lucky enough to meet, on subjects such as food and diet, happiness, the future, etc. Therefore, this video tries to depict a tiny slice of Kenyan culture, represented as sincerely as possible.

We presented it officially on 24th March this year, in front of a large public and a jury composed of Carlo Petrini himself as well as staff members of the UNISG. Our video won the hearts of both the public… and the jury, because it won the 1st prize!

I’m dying to share this video with my SOS Cuisine friends, but I’ll have to wait for a while. In fact, we have entered it in the International Student Documentary Film Festival and it cannot be published yet. So while you’re waiting, have a look at some photos of the trip: 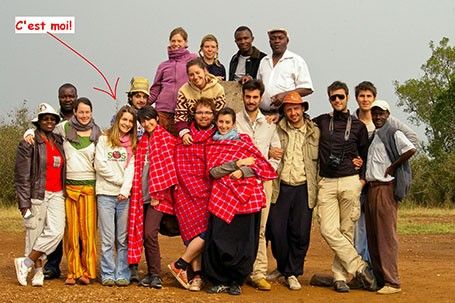 N.B. Many thanks to Cecilia Auxilia for the pictures.

To learn more about this training you can check this blog (written by a Kenyan graduate from UNISG who organized the trip).