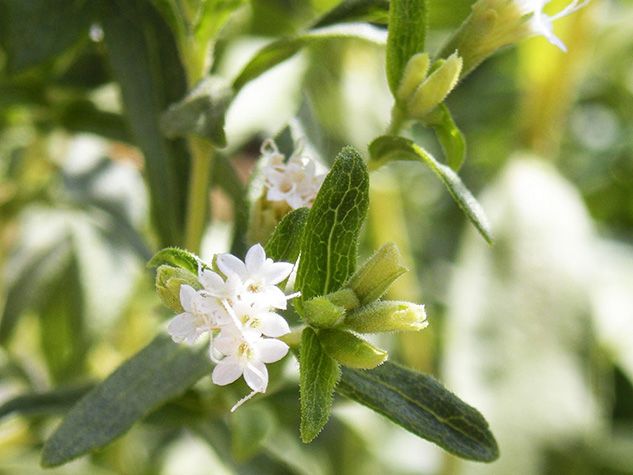 The story behind stevia

When you consider the clear link between excessive consumption of sugars and carbohydrates and the epidemic of obesity and diabetes that afflicts our society, the mad rush for non-caloric sweeteners is self-explanatory. Logic demands that by reducing the consumption of sugar, one should be able to control excess weight. Replacing sugar with artificial sweeteners does not give always the desired results. But what about stevia?

Stevia is a plant that’s native to South and Central America and it is part of the Asteraceae family like daisies and echinacea. It has been used since time immemorial to soften drinks and sweeten foods.

Stevia was identified by botanist Moises Santiago Bertoni in Paraguay in 1899, hence its Latin name: Stevia rebaudiana Bertoni. Initial analyses that isolated and identified steviosides (especially rebaudioside A) date back to 1931, in France.

The sweetening effect of stevia, more specifically of steviosides, has therefore been common knowledge since the early 20th century, and even long before that, because of its traditional use. It’s the Japanese who first began to develop a non-caloric sweetener from stevia. Stevia was approved in this country in 1970. In those days, the use of artificial sweeteners was banned in Japan.

Another tale of big bucks

The situation was the exact opposite on this side of the pond. The craze for cyclamate and saccharin was at its peak here during that period. 1965 led to the discovery of aspartame. All these molecules were patented.

The demand was phenomenal… and so was the lobbying. Who would willingly welcome the arrival of a natural and non-patentable sweetener on the market? (It’s nothing new that vested interests determine political agendas.)

Thus began a controversy about the safety of stevia. All those opposed to its marketing claimed that stevia in all its forms was dangerous to health!

In 1968, an article published by researchers in a journal called Science stated that a decoction of stevia affects the fertility of female rats and this over a period of up to 60 days after discontinuing the decoction. (4) If you look more closely, the methodology (concentration of the extract and identity of the plant) is not perfect.

A 1989 study shows that although the consumption of stevia extract might possibly have an effect on the fertility of female rats, such an effect is uncertain and it certainly doesn’t apply to males. (5)

Another study shows that the consumption of stevia extract by male rats causes a drop in testosterone, decreased sperm fructose content and decreased fertility. (6)

In short, it is a battle of in vivo studies. So the sale of stevia was banned in the United States and consequently in Canada.

Stevia as a natural product

Over time, the authorities mellowed their stance: towards the mid-‘90s, the ban on extracts was still in force but the sale of the whole plant became acceptable. Thus stevia ended up in the world of natural products. The plant itself has a distinctly sweet taste, between 45 and 300 times the sweetness of sugar, depending on the season and concentration of active compounds.

Curiously, with the recent hue and cry against aspartame in the population, the torchbearers of harmful food (Coca-Cola and PepsiCo) need to find a way to boost their global image and maintain sales. So this had led to the emergence of further studies and analyses that confirm the traditional safety of stevia and its purified compounds. (7-10) Government agencies are now being pressured to approve stevia and its derivatives.

Thus, stevia has started appearing in various countries. In Canada, the use of this plant was officially accepted in 2004 (before this, it was not banned as a NHP [natural health product] since there was no regulation). In the US, the use of stevia in a supplement (dietary supplement) has been allowed (or at least, not banned) since 1995.

As for extracts, it was not until 2008 that purified rebaudioside A became available and approved in the US, Russia, Switzerland, Australia and New Zealand. In 2009, it was France’s turn to approve it. In Canada, the regulation regarding rebaudioside A was passed in September 2009. (11)

Although stevia has long been used by the indigenous people of South and Central America, has it reduced the fertility of these populations? It certainly doesn’t look like it!

As stevia belongs the Asteraceae family (daisy, ragweed, etc.), there might be a risk of cross-allergy. But the part that’s used as a sweetening agent is the leaf and not the flower. Researchers who have sized up this possibility conclude that the risk of allergy is virtually nil and merits no warning. (12) What’s more, using a purified fraction or steviosides poses no risk whatsoever.

With regard to the effect of stevia on microbiota, we know that steviosides are used by lactobacilli and bifidobacteria as a nutrient source. This effect is not so strong that stevia can be said to have a prebiotic effect (which increases the population of good bacteria in the intestine). In contrast, it does ensure that there is no harmful effect on the intestinal microflora. (13)

The story behind stevia and its active compounds is of special interest to lobbyists and big businesses. When the bigwigs didn’t want it, it was deemed dangerous, and now they are interested in it, it is considered safe. But hey, hasn’t it always been?