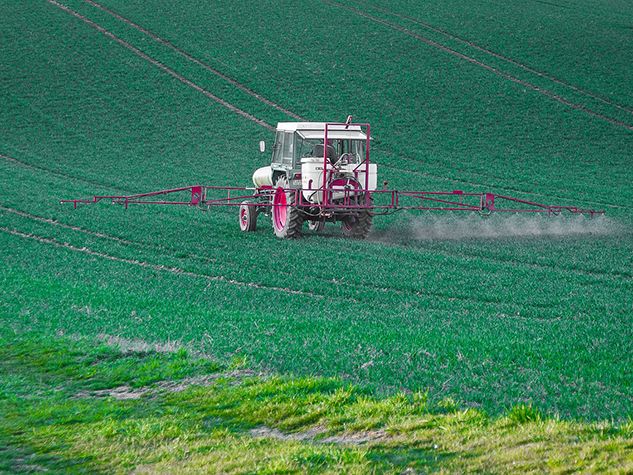 Glyphosate on Our Plates

Introduced into the market in 1974 by Monsanto, under the brand name Roundup, glyphosate is a herbicide known for its high efficiency. It is the most widely used herbicide in the world. In 20 years, the amount of glyphosate applied in the fields has increased fifteenfold.

To eliminate weeds, glyphosate is sprayed on crops throughout their growth. It can also be used just before harvesting, as is the case with certain cereals (such as wheat, barley, oats) and some legumes. The purpose of this maneuver is to improve the crops’ yield. In effect, this technique dries out the plant which makes it quicker to harvest. This, however, increases food contamination, and it should be noted that the last stated practice is prohibited in Europe.

Should we be afraid of glyphosate?

This subject is sensitive and controversial.
In recent years, the world has become increasingly concerned about the potential direct and indirect effects of the large-scale use of glyphosate.

Glyphosate can have an impact on biodiversity, especially in aquatic areas, which is a concern for scientists. It is found everywhere: in water (water streams, groundwater, drinking water), in soils, in the air and even on our plates.

In addition to these environmental impacts, glyphosate is said to be hazardous to health. In 2015, the World Health Organization’s International Agency for Research on Cancer listed glyphosate as a “probable carcinogen” for humans.

A new meta-analysis, published in February 2019, confirms that people who are highly exposed to glyphosate-based herbicides, such as farmers, are 41% more likely to develop a type of cancer called non-Hodgkin lymphoma, an aggressive form of blood cancer.

In addition, several scientific studies conducted on animals have shown glyphosate to be an endocrine disruptor and of inducing harmful effects on the digestive system through its negative impact on intestinal bacteria.

In the United States, Bayer (which bought Monsanto) is facing thousands of lawsuits over the alleged cancer risks associated with the use of weedkillers such as Roundup, and will have to spend nearly 10 billion dollars according to a compensation agreement reached in June 2020.

Glyphosate on our plates?

The Canadian Food Inspection Agency analyzed the glyphosate content of nearly 13,000 foods, representative of common Canadian grocery purchases, between 2015 and 2018. The data showed that 1 in 3 foods contains glyphosate residues and 1 in 4 contain residues in foods intended for infants, sometimes at concentrations above the contamination limits deemed “safe” by Health Canada.

Currently there are no studies clearly indicating a causal link between the consumption of foods containing glyphosate residues and the risk of developing a disease.

Glyphosate is even found among organic products. In effect, 24% of the biological samples tested contained glyphosate residues.

Cross-contamination seems to be a possible explanation. This would be caused by the proximity of conventional and organic fields whereby airborne contamination as well as river and ground water contamination would affect organic crops.

Despite this, organic products are likely to contain fewer chemicals that are harmful to health. Moreover, according to tests conducted on 40 people by the GMO Vigilance group, those who eat mainly organic foods would have lower or no concentrations of glyphosate in their urine as compared to those who don’t. It should be noted that urine tests are simply an indication of exposure to glyphosate and do not necessarily indicate any risk.

What steps can be taken?

In order to protect the health of Canadians, Health Canada sets limits on the concentrations of pesticide residues that may be present on the surface or inside of a food product. These concentration limits vary depending on the different foods (e.g., beans, lentils, wheat, barley, etc.).

However, certain food products exceed these limits. In addition, we consume a variety of foods every day, and exposure to glyphosate and the risks associated with it are cumulative.

Despite these potential negative health risks, the use of glyphosate was re-approved in 2017 by Health Canada’s pest control regulatory agency, for a 15-year period.

At the same time, other countries such as France, Germany and Austria are adopting measures to severely restrict, and even prohibit, the use of glyphosate within the next three to five years. Even Italy has decided to ban the importation of Canadian wheat because of glyphosate residues.

Glyphosate is being used more and more, and it is because of this that we are finding it in the environment and on our plates. As a consumer it is difficult to avoid it completely. You can always opt for organic (less contaminated) and local foods (so you know where they come from). In order to eliminate certain pesticides from your fruits and vegetables here is an interesting article to read: How to Wash Fruits and Vegetables to Get Rid of Pesticides.

Beyond avoiding pesticides, cooking at home with fresh foods and avoiding ultra-processed foods is the right choice for your health.

Jennifer is a Registered Dietitian graduated from the University of Montreal in December 2018 and is a member of the Ordre professionnel des diététistes du Québec (OPDQ). She believes that the quality of our food choices has a direct impact on our health and energy level. Her goal? To help people improve the quality of what they put in their plates, for their better well-being and greater pleasure.